Foods to Avoid During Pregnancy

Home >> Foods to Avoid During Pregnancy

No doubt about it, you are eating for two now, and as your pregnancy progresses past the first trimester you feel yourself feeling hungrier than you ever have before.

You should focus on eating healthy foods, and small frequent meals may keep you from feeling nauseous.

There are some foods that you need to avoid eating while you are pregnant so let’s talk about those here.

Foods to Avoid While Pregnant

While not a food, alcohol is a beverage that should be avoided during pregnancy.

And while some doctors say it is okay to have the occasional single alcoholic beverage during pregnancy, even more, say that it is best to abstain.

Unpasteurized juice, milk, and cheese can contain several different types of bacteria that can be harmful to an unborn baby.

The bacteria that these unpasteurized foods may contain include Listeria, E. Coli, Salmonella, and Campylobacter. These bacteria can be naturally occurring in unpasteurized products or they can become contaminated during collection or storage.

Make sure that all of the milk, cheese, and fruit juice that you consume during your pregnancy has been pasteurized.

Specific cheeses to avoid include soft cheeses like Brie, feta, or blue cheese unless the package says that it has been pasteurized.

Most commercially available fruit juices and milk products have been pasteurized, those to avoid are those that you might find at your local farmer’s market.

Raw or Under Cooked Eggs, Chicken, and Meat

Raw or undercooked eggs, chicken, and meat can contain harmful bacteria that can cause food borne illnesses and may harm your unborn baby.

Check the temperature of all meats with a meat thermometer before eating them, and make sure that your eggs are cooked until firm. If you have a hankering for lunch meat or hot dogs make sure that you heat it up until it is steaming hot, because rarely lunch meat and hot dogs can carry listeria.

While fish contains Omega 3’s which are important to a healthy pregnancy, some types of fish contain high levels of mercury and should be avoided during pregnancy and breastfeeding.

Some of the fish that you should avoid include tuna, swordfish, marlin, orange roughy, shark, and king mackerel.

If you are craving fish and some of those amazing omega 3’s stick with salmon, haddock, flounder, cod, and tilapia.

Make sure that you also avoid raw or undercooked fish while you are pregnant.

Your caffeine intake should be strictly moderated while you are pregnant. You don’t have to cut out all caffeine but you should keep your daily dose of caffeine to 200 mg or less.

The outside of the fruits and vegetables can be contaminated with bacteria such as E.coli, listeria, and salmonella that can easily spread to the inside of the fruit or vegetable when it is cut, juiced, or peeled.

No need to buy a special fruit and veggie wash though a simple thorough washing under running water should suffice.

Raw sprouts like alfalfa, radish, clover, and mung bean sprouts are very healthy and provide a nice crunch to salads and sandwiches, but they should be avoided during pregnancy.

You can still enjoy your sprouts but they need to be cooked first to make sure that they don’t contain any salmonella or E.coli. The moist environment required to grow these sprouts is an ideal one for these types of bacteria to thrive in and you can’t simply wash them off of the sprouts.

Now you know what foods that you should avoid eating while you are pregnant.

If you have consumed some of these foods accidentally or before you knew you were pregnant don’t fret everything is probably fine especially as long as you feel well. If you don’t feel well reach out to your doctor for further guidance. 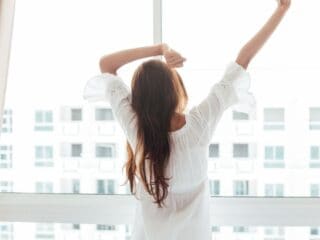